The 2017 International Assistance Dog Week Proclamations Are In! 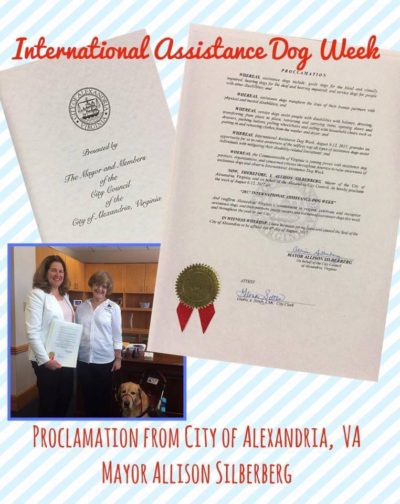 International Assistance Dog Week (IADW) seems to come and go so quickly every time, but it is truly a celebration that gets better every year. Both my assistance dog, named Alepo, and I look forward to participating in this important event because we are proud of the assistance dog community around the world and this is the time each year that we recognize all these devoted, hardworking assistance dogs helping individuals, like myself, mitigate their disability related limitations.

The goals of IADW are to: 1.) Recognize and honor assistance dogs. 2.) Raise awareness and educate the public about assistance dogs. 3.) Honor puppy raisers and trainers and also 4.) Recognize heroic deeds performed by assistance dogs in our communities. It is also important to remember that IADW was originally established thanks to the efforts of Marcie Davis, a paraplegic for over 45 years and CEO of Davis Innovations, a consulting firm based in Santa Fe, NM. Thanks, Marcie.

I am an individual, who is fighting a battle with epilepsy, diabetes and a physical disability,
each and every day. This battle with my body is truly challenging, yet my life changed for the better thanks to the partnership with an assistance dog, a cream Labrador retriever, named Alepo, and an organization called Canine Partners for Life, both who truly restored a “level of normalcy” in my life.

So during IADW, I make a personal effort to recognize and honor these amazing dogs and the organizations that raise and train them. Each year I write a letter to: the President of the United States, each Governor in all fifty (50) States, to the Joint Chiefs of Staff in Washington and to local Mayors. I also reach out to residents within various States to join me in soliciting these Proclamations, as many States now require the request come from an in-State resident. So many of the “Proclamations” are received now due to the co-operation of so many people around the country – I am truly grateful.

This year we were successful honoring our special assistance dogs and all those who play a role in raising and training them. At the same time we helped spread the word about the importance of Assistance Dogs to the general public here in the United States and around the world, by seeking and promoting all the Proclamations and Letters of Support we received from government officials throughout the country.

But, it is not over yet. Moving forward toward   International Assistance Dog Week 2018, which will happen between August 5th – 11th, 2018, we want to spread the word about these amazing Assistance Dogs even more, seeking more Proclamations and more Letters of Support not only here in the United States, but also around the world. To be able to accomplish this we need your help and support to be successful.

If you would like to play a role in our effort next year for International Assistance Dog Week, just send an email to edwardfcrane@aol.com, and we will work together to help make this special event even a bigger success. I look forward to hearing from you. Thanks.